The first thing you should know is that New Pokémon Snap is the only game I've ever preordered, so you know I was excited for it. I’d played the first Pokémon Snap on Nintendo 64 when I was in middle school, and I'd craved so much more than that little game offered in 1999. New Pokémon Snap’s biggest appeal is probably that it sparks millennials’ nostalgia for the first Pokémon popularity explosion, and the title of the game being "New" Pokémon Snap really emphasizes that intent to build on something old.

The second thing you should know is that as a non-mainline Pokémon title, New Pokémon Snap is fairly short and simple. It's a low-stress game and the simplicity is not necessarily a huge disadvantage, but it’s probably best to calibrate your expectations accordingly! New Pokémon Snap is a first-person photography game — like first-person shooting, except the only time anyone gets hurt is if you bonk a Pokémon too hard with a fluffruit. Your character rides through each course in an on-rails autonomous pod, letting you focus entirely on snapping wildlife shots as you visit varied terrains in the Lental Region, like a dense jungle, inside an active volcano, and below the sea.

The visual design in New Pokémon Snap is really well done — each location feels detailed, full of life, and immersive. 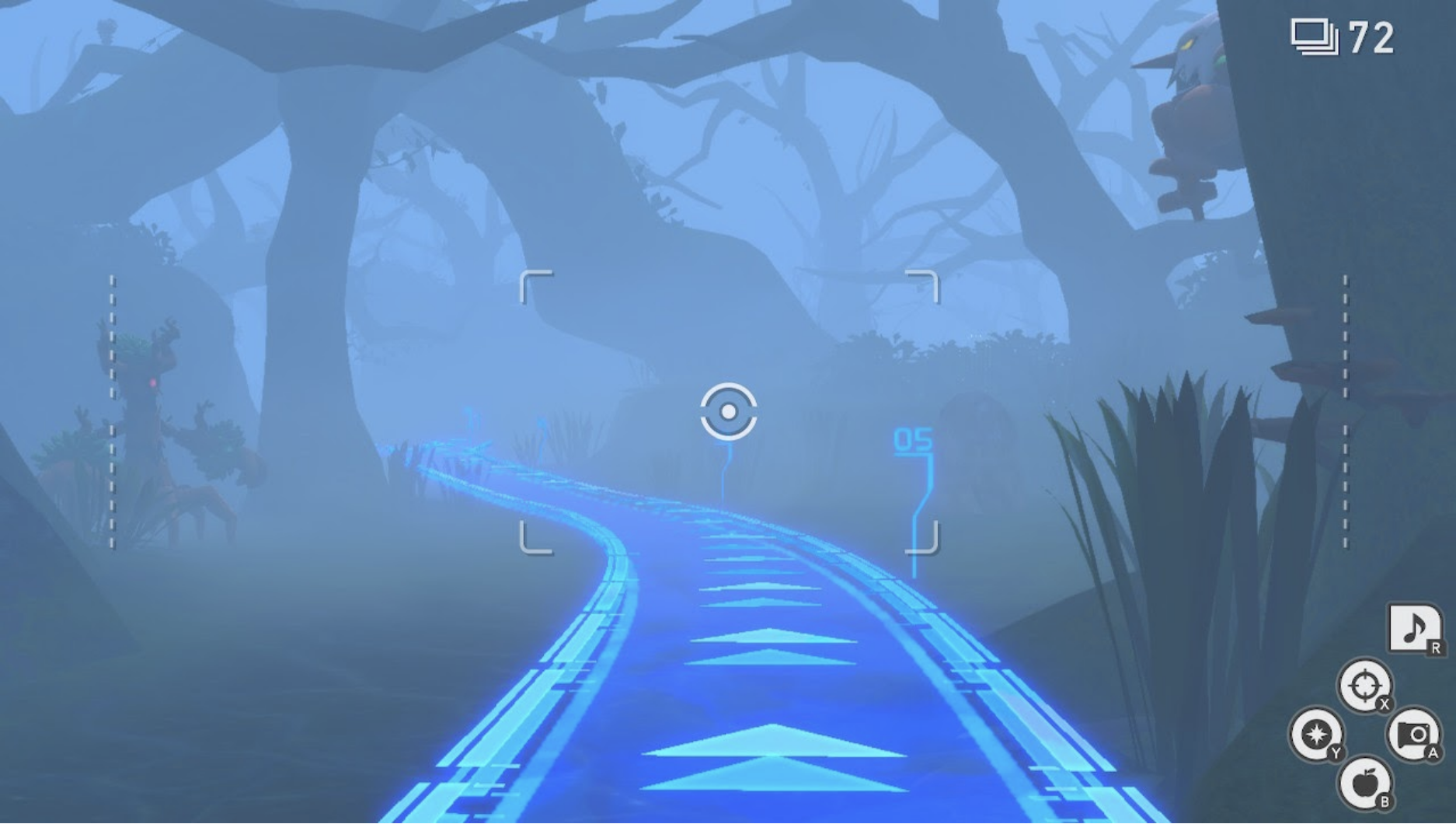 When I first fired up this game, I was banking on it being the perfect antidote to work burnout and I was excited to melt into the lush Pokéverse. The game does fit that bill, but it took a little bit of playtime to get there. The onboarding dragged on. Tutorials are skippable, but there is a lot of upfront dialogue and the introduction of a handful of inconsequential characters that slow down momentum. I also realized quickly that the annoying sound effects would really dampen my experience, so I adjusted the volume settings so that the sound effects were at a level for me to be able to faintly hear my Poké Flute (wait, it's a Melody Maker and not a Poké Flute anymore for some reason) but the WHIIRRRRR sound with every selection became less oppressive (I really wished I could turn that thing off).

Story-wise, there isn’t much to it — you are capturing photos of wild Pokémon to study their behavior. (I’m a researcher in real life so this appeals to me!) In the original game, players progressed through a handful of courses in different terrains, where Pokémon would be prancing around or sleeping or just doing their thing and you could take pictures of them. The goal was to send Professor Oak your nicest photos to rack up points — the highest scores went to photos with big, centered subjects, and especially those that captured a Pokémon doing something unique, like Pikachu sitting on a surfboard. 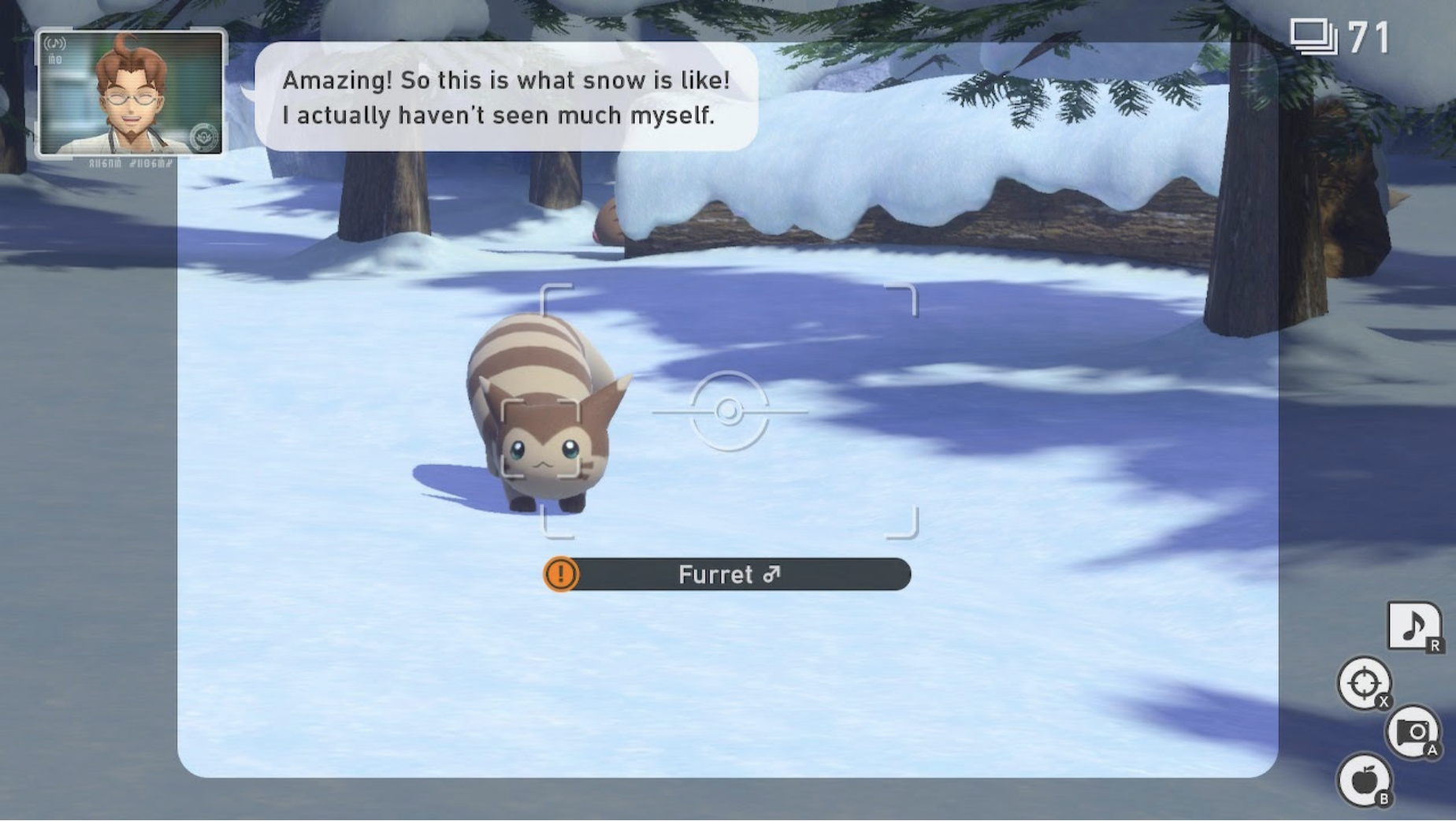 In New Pokémon Snap, the basic premise remains (with Professor Oak swapped out for Professor Mirror and his unsettlingly pointy facial hair), but there are more courses and within each course you can progressively level up and see new and different things. Replaying courses is somewhat repetitive, but I find this repetition to be easygoing and relaxing instead of tedious — with enough depth and variability that I keep noticing small, different things.

Discovering new moments, interactions, and paths is a delight, and it feels like there is a satisfying amount of discoverability. Another expansion on the original game is that instead of having one Photodex image for each Pokémon species, you have four. It's a little confusing what these 1-star to 4-star slots mean, but basically the more unique a Pokémon's pose or activity, the higher the star rating. And so for each Pokémon, there are four different spots you are trying to fill and improve with better photos. This adds a layer of challenge and if you are a collector-type player, it's satisfying to fill Photodex pages for each species.

New Pokémon Snap also includes an additional play feature in which research characters request specific photos through something called LenTalk. For example, they might ask you to get a photo of a happy Scorbunny laughing or a Metapod lowering itself from a tree. These requests make things a lot more interesting and I really love the concept, but the LenTalk aspect of the game also feels unreliable and incomplete. I often thought I was fulfilling a LenTalk request with my shots but upon submission they didn't register as anything. It seems like these LenTalk assignments are often too vague or too difficult to complete exactly right, creating the wrong kind of challenge. (How many photos do I need to take of a snoozing Exeggutor before I figure out what I'm doing wrong? Or, realistically, Google it?) There are also a lot of open LenTalk requests that pile up regardless of whether you are checking any off, and if a request slides in AFTER you’ve gotten that same photo on your own, you need to do it again to get credit.

The LenTalk requests seem like a fumbled opportunity to extend playability in a genuinely fun way — and it’s disappointing that it doesn’t feel like it works correctly.

Overall, New Pokémon Snap is cute and charming, and it's fun to feel like you are peeking in on Pokémon in their natural habitats. Some play aspects are frustrating, but the joy of immersing myself in Pokémon wildlife generally makes up for the game's shortcomings.

I give New Pokémon Snap a 3.5 out of 5. It's very fun and a little addictive, and the scenery and music make the Lental Region a nice place to visit. The downsides? Even though it goes far beyond the scope of the original N64 game, New Pokémon Snap is still pretty simple and short (give us more courses!), and it suffers from a few experience design issues. If you feel nostalgic about the original, it’s probably worth your dollars and time to revisit what you liked about it and see what’s new.

This game was reviewed and purchased by guest reviewer Becca Kennedy.