Review: The Eyes of Ara - Puzzles on Puzzles

The Eyes of Ara, officially released on the Nintendo Switch on Oct. 15th, is a puzzle adventure game inspired by games like Myst, and developed by 100 Stones Interactive. Being someone who enjoys puzzle games and scary (but not-too-scary) games, I thought this would be a perfect game to try around the spooky holidays. I was expecting this game to be scary (it takes place in an old medieval style abandoned castle after all) but it never actually scared me. It did have a few eerie moments, but it wasn't to the level of "jump-scare". I actually found the game pretty relaxing at times. 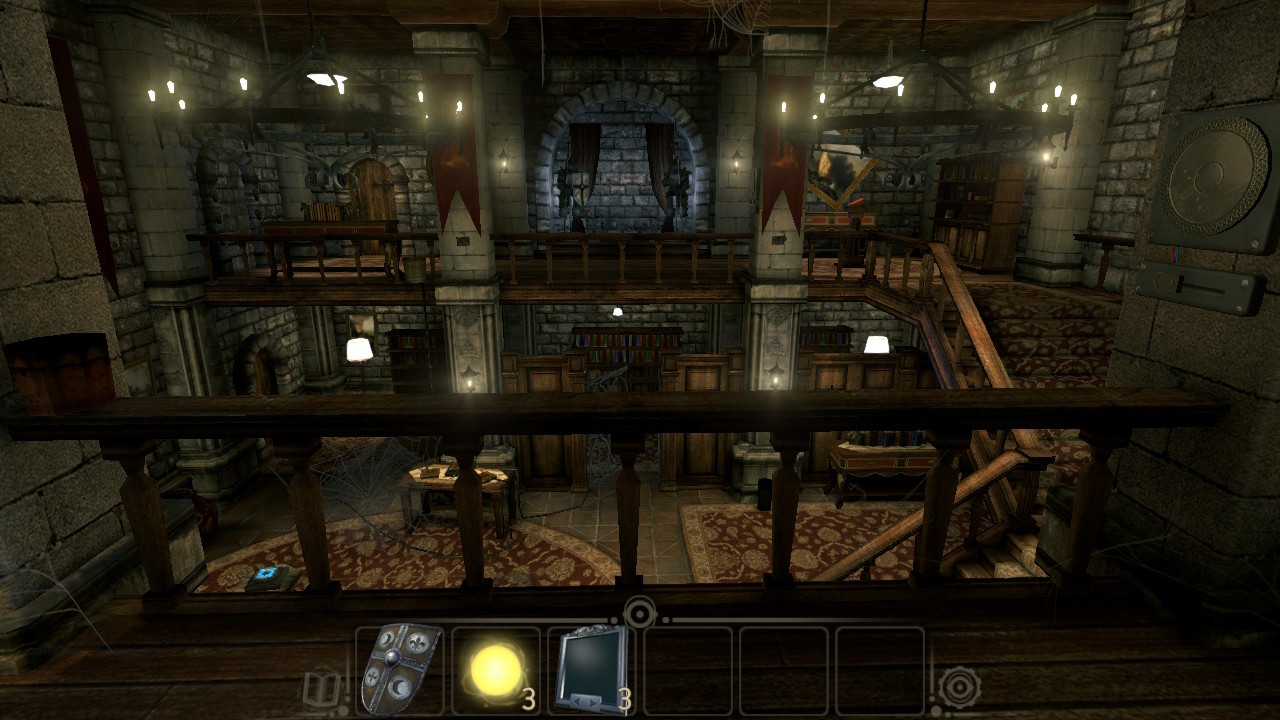 The premise of the story is an old castle that's been abandoned for many years has suddenly started giving off radio interference causing issues with the nearby town's Wifi. Your character has been tasked with the job - because everyone else is too scared - of going up to the castle, figuring out what is causing the radio signal, and shutting it down.

On the switch you're able to play the game 2 ways: either connected to a tv with 1 Joy-Con or handheld touchscreen. Being a big fan of handheld mode I opted to play with the touchscreen. That being said, it's given that the controls aren't very complex. It's mostly tapping, swiping to look around the environment and pinching to zoom out of certain puzzles. The game begins with an intro-sequence of your character rowing their way to the castle. There is an as-you-go tutorial explaining the controls that starts when you make it to the dock. Making your way up to the castle, you immediately begin encountering puzzles.

Each room you enter has a puzzle to solve to progress to the next area or room. As you advance, the puzzles get more complicated and sometimes are divided among multiple rooms. The more intricate puzzles are inspired by astronomy. You'll need to collect objects and reference books, papers, notes, and clues left behind by the previous residents to solve the puzzles. A lot of the pages you find are torn-out novel entries written by the past residents that tell their story. They're sometimes hidden in very difficult places so you have to think a little out of the box when looking for clues and hints. A lot of the clues are hidden so well I ended up being stuck for an hour, back-tracking, trying to figure out what I missed. A word of advice I wish I knew before playing: pay attention to the paintings, floor tiles, and ceiling tiles.

Besides being riddled with clues and hints, the castle has no shortage of secret passages and hidden rooms which as you have probably understood by now are VERY well disguised. Some of the most memorable moments I have from playing the game are clicking a switch, expecting one thing to open, but instead, a secret passage is exposed leading to a whole new room to explore. This game is available for multiple platforms and originally released for PC in July 2016. When I looked into the game a little bit, I noticed that last year around the Holidays the developer released a Christmas-themed update. For a limited time, you could visit the castle while it's festively decorated for Christmas. I love it when games do that and hope that's something they do for the Switch version this year! This game has very positive reviews on Steam, and I will have to agree! Even though the puzzles do get very complicated and I found myself wandering all over the castle, frustrated, looking for any kind of clue I did enjoy it. After about 7.5 hours I completed the game, but I'll admit having to look up a few guides online when I got stuck, which was pretty often near the end. I don't think I would have been able to figure out a few of the puzzles in the second half of the game without lookin them up. When I finally did figure out a solution it was very satisfying, and I had quite a few "Oooh, that's how you do it!" moments.

The graphics look pretty good for the game being a few years old and performs well on the Switch. To give you an idea of how the graphics look, I would say they're in the same family as Penumbra or Amnesia. The soundtrack is also really well done. There were a few times the music would get a little louder and it grabbed my attention in a good way. The game is currently listed as $14.99 in the eShop (the same price as on Steam) and if you're into puzzle games or even escape rooms, I think it's definitely worth checking out. I give score of: